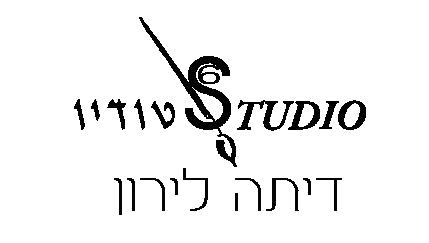 I found the painter, in the studio of course, in front of a large canvas set on a pedestal working in a slightly odd yet very unique way – without brushes.

She applied the paint with her bare hands and inserted it into the canvas using little rags. I think that this very touch clearly illustrates the meaning of the direct connection between this painter and the art of painting. The meaning is the realization of her intentions in color and shape in the form of her creations.

Dita Liron Rosenzweig was born in Israel, and it is here also that her personality as a painter materialized.

She studied in Be’er-Sheva at the Center for Visual Arts and paints in her studio in Netanya. She won the Mayoral Award several years ago. She had her own exhibitions in Israel and Switzerland and took part in the Mediterranean Contemporary Arts Biennale in Croatia.

Dita doesn’t necessarily care to express her opinion of herself, but one cannot remain indifferent to her art. Not only is she an artist of honorable stature, but she is an artistic persona, a painter with incomparable creative ability. You must agree that even experienced professionals don’t often encounter a phenomenon such as that.

To the artistic world that she has created she will not let any passerby enter, rather the gentle observer, one who’s sensitive and broadcasts on the same wave as she does. It is not easy to penetrate this world, but it is harder still to break loose of its spiritual domination which is invisible.

Dita draws women a great deal.  Harmonious silhouettes softly drawn on a colorful red or yellow background, with no facial features, that create an individual and psychological tension originating from the color and shape of the characters. No variety of colors, no impressive plot, rather a very gentle and favoring sensitivity to the characters in the painting that emits a lyrical radiation of the artist’s talent. The lyrical entity gains even more power with portraits of pregnant women and their inner sensations, which evoke a more feasible and greater impression.

Another favorite genre of hers is landscape, specifically desert-landscape. Landscape artists know how difficult it is to paint a desert without succumbing to monotony. Dita does not aspire to revive the surface or emphasize any certain object, and yet the observer is invited to acquaint himself to an undisclosed secret that’s created by the red, yellow and orange mists. In these sceneries one feels the breath of space - unlimited space that gives a cosmic sensation brought-down to us by the artist from unreachable height to the ground.

The artist paints flowers with love and joy; one single flower per painting. This fantastic, charming and big flower seems to emit ultra-violet glow.

The process of her creation combines femininity, poeticism and gentility to a conception of minimum means and maximum artistic product.

I now know why Dita prefers touching the canvas with a worm hand and sensitive fingers rather than with “bunch of animal-hair attached to wood”.

Dita’s paintings are an endless research for the secret of meeting between colors and lines and the feeling conveyed with each such encounter.

Landscape paintings are made up of a mosaic or stained glass in a work of thought that reflects the same search.

The paintings invite the viewer to enter them and be a guest for a moment in the strange landscape, rest, walk, dream….

Her ink paints one painting all her life, only the lines and colors change. This painting is her expression tool and the viewer is a key part of it